The beginning of the year is always a slower time for weddings, but it gives me an opportunity to play the harp for other events.  The Chicago School of Hot Yoga began a new concert series last month.  Every Sunday at 4:00 pm, they have a musical group come in and follow the concert with a community yoga class.  The whole evening is open to the public and by donation.  If you are in the Lincoln Park area on a Sunday afternoon, stop by!

Whenever I perform in a concert setting, I like to include a wide variety of music genres – and always a piece or two that no one expects to hear on a harp!  My program started with a set of six folk songs (three Welsh and three Irish).

“Suogan,” a Welsh lullaby, is one of my personal favorites.  I followed that with “David of the White Rock” and “Serch Hudol (The Allurement of Love).”  The Irish tunes were “Down by the Salley Gardens,” “Farewell to Liverpool,” and the ever-popular “O Danny Boy.” 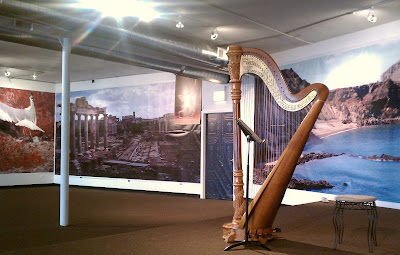 “Hymne” by the contemporary Greek composer Vangelis began the classical portion of the concert.  Although he is better known for his film scores (Chariots of Fire and Blade Runner), this piece is a favorite with my brides for wedding music.  Next was Bach’s “Wachet auf, ruft uns die Stimme (Sleepers, Wake),” a chorale prelude that you might recognize from coffee commercials!

Bernard Andres is a French composer who writes extremely well for the harp.  His pieces really show the harp at its best, and are an absolute pleasure to play.  He uses a variety of special effects, which I always demonstrate before I play.  I chose “Pistache” from the set Epices, and followed it with Godefroid’s “Romance without Words.”

The last piece in the classical set was a piece by Canadian composer John Weinzweig.  Written in 1983, “All These Woes! (Shakespeare)” is not only atonal, but I get to attack the harp with a wire hanger.  This piece doesn’t sound like the “dream sequence” music with which harps are usually associated! 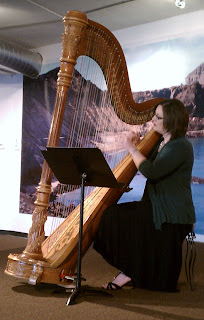 I love to play contemporary and recognizable pieces as well.  Everybody wants to hear something they know, and the sound of the harp makes familiar favorites new and exciting!  The first group of popular songs were from musicals and movies:  “Edelweiss” from The Sound of Music, “Love is Here to Stay” from An American in Paris, and the “Theme” from Love Story.  The next set included “I Get a Kick Out of You” by Cole Porter, “At Last” as performed by Etta James, and the Beatles hit “In My Life.”

Enya’s “Only Time” is an audience and wedding favorite, and paired well with Josh Groban’s “You Raise Me Up.”  That was followed by “Come Sail Away” by Styx.  Yes, I can play Styx on the harp!  The concert concluded with Sting’s “Fields of Gold.”

One of the highlights of the evening for me was meeting with a couple who lives in Chicago, but will be getting married on Mackinac Island this summer.  I’m really looking forward to providing harp music for their wedding at Mission Point Resort!

You don’t have to have a special occasion to have a harpist.  I am available for home concerts, private dinners, and lecture-demonstrations of my harps.  Visit my website for more information!