On Christmas Eve, I was invited to play for the service at the First Christian Church in Mattoon, Illinois.  Once again, it was a clear and (relatively) pleasant evening.  I managed to make it through an entire Christmas season without having to shovel the harp out of the house! 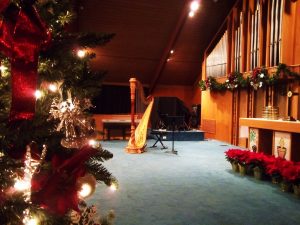 Although the prelude wasn’t scheduled to begin until 6:30 pm, the sanctuary was already filling up shortly after 6:00, so I started a little earlier.  As people arrived, they were greeted with the sound of the harp playing some traditional Christmas carols, along with a few classical works associated with the holiday and a few less familiar Christmas pieces from France, England, and Austria. 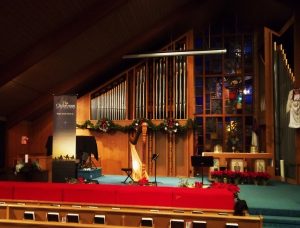 The service of lessons and carols alternated between scripture, congregational singing, and special musical selections.  The other musicians included a handbell choir, pianist, organist, and several vocal solos and duets.  For the harp solo, I played “Lo, How a Rose E’er Blooming.”  It might not make the top of most people’s favorites list, but it has always been one of mine!  During communion, I played the Appalachian carol “I Wonder as I Wander.”

As candles were lit at the conclusion of the service, everyone joined in singing “Silent Night,” followed by “Joy to the World.”  After the service, I loaded up and was off to South Dakota to visit my family.  Since it was too cold to leave the harp in the car, I had to take it into my hotel room when I stopped for the night in Columbia, Missouri.  I always get some strange looks in the lobby! 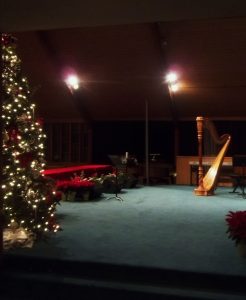 I’m putting up my Christmas music for this year, but it’s never too early to book for your parties and church services for 2012!  Visit my website ~ Mattoon Harp Music ~ or call 1-574-344-9401 for information on having a harpist for your holiday event. 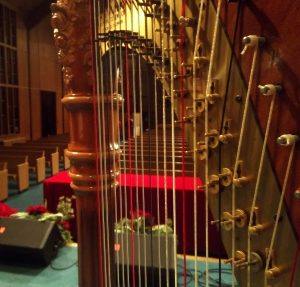