Tim & Kurt had hoped for an outdoor wedding at the Goeglein Homestead gazebo, but the high temperatures and threat of rain moved the ceremony indoors.  Even though it was the back-up location, the decorator made it look beautiful! 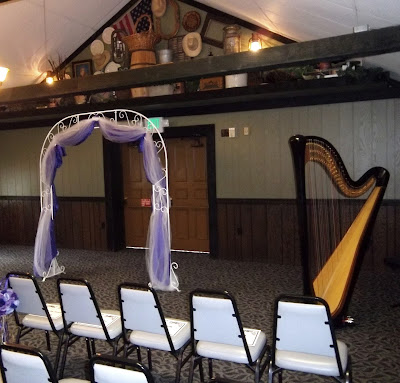 As guests arrived, I played many Baroque-era pieces ~ Tim is a big fan of Bach!  Some of these pieces included “Impertinence” by Handel, “Sheep May Safely Graze” by Bach, “Fur Elise” by Beethoven, and the “Finale” from Royal Fireworks Music by Handel.  The ceremony was delayed a bit in starting, but I kept playing until everyone was ready to begin.

The wedding party, followed by Kurt seating family members, entered to Bach’s “Prelude in C.”  Tim’s processional music was “Wachet auf, ruft uns die Stimme.”  I have to say that of everything Bach composed, this piece is my personal favorite! 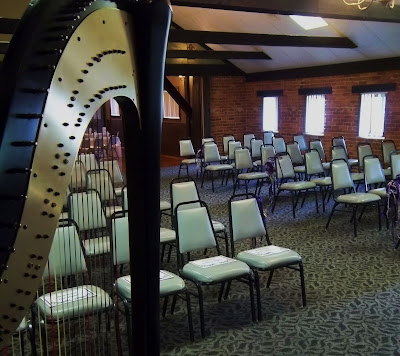 At the conclusion of the ceremony, I played “Aria” from Handel’s Rinaldo as a recessional.  Guests headed to the adjacent room for the reception, and the wedding party went outside for a few pictures at the gazebo.  Even though the weather kept the ceremony inside, they were still able to take advantage of taking the formal pictures in the garden.  A perfect solution for a questionable weather situation!

As a Fort Wayne wedding harpist, I have had the pleasure to play for wedding ceremonies and receptions throughout Northeast Indiana.  If you would like more information on having a harpist for your wedding, please visit my website ~ Fort Wayne Wedding Music! 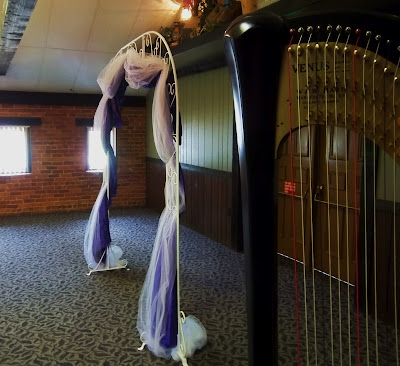