Up until about two hours before the ceremony was supposed to begin, the weather forecast for Kris & Dan’s wedding in the western suburbs was terrible.  It rained all morning and much of the afternoon, but then unexpectedly cleared up just in time for their early evening ceremony!  They were able to continue as planned with their ceremony in the rose garden of Wheaton’s Cantigny Park. 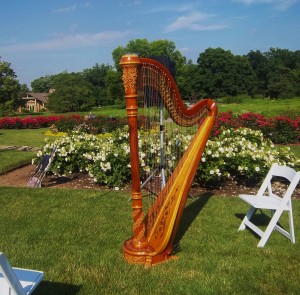 Set-up was a little delayed because everyone was waiting out the weather, so I just kept the harp out of the way of the park crews and florists while they prepared the chairs and an arbor that was built by the groom.  I still had plenty of time to tune the harp before the guests began to arrive.  My favorite touch was the life-size cutouts of their two dogs.  No pets allowed in the park, so this was the next best thing!

Amanda from Shannon Gail Weddings & Events was the couple’s wedding planner, and gave me the signal when everyone was lined up and the processional was ready to begin.  I played Bach’s “Prelude in C” for the seating of families, the bridesmaids’ entrance, and the flower girl.  Kris chose “Canon in D” for her processional. 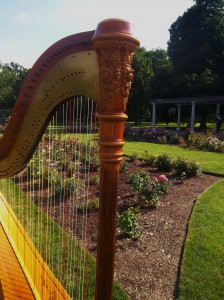 The ceremony began with a Chinese Tea Ceremony, and as the couple presented tea to their parents, I played the Bach/Gounod version of “Ave Maria.”  The recessional went to popular music – “I’m Yours” by Jason Mraz. 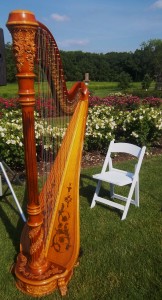 After the ceremony, I wheeled the harp up to the patio of Le Jardin (the reception location in the Visitor’s Center) for the cocktail hour.  With the high temperatures, most of the guests enjoyed the air conditioning (and mojito bar!) inside, but I had a few come join me outside as I played the couple’s special requests, including:

For weddings in Chicago, Wheaton, and the Western Suburbs, I am available to provide harp music for ceremonies, receptions (cocktails & dinner), bridal showers, and rehearsal dinners.  You’ll find more information about having a harpist for your wedding at: West Chicago Wedding Harpist.