For the first time in the many weddings that I played, I was assigned a “handler!”  His entire job was to make sure that the harp did not get wet during the ceremony.  When the day began for Chad and Angela, it looked like the wedding plans were going to change because the sky really could not have looked more unnerving to a bride having an outdoor wedding.

However, about thirty minutes before the ceremony, the sky cleared up and everything was a go!  Everyone went outside to the beautiful grounds of Senica’s Oak Ridge in LaSalle.  Then the ceremony started, and did my handler ever come in handy. No sooner than the guests got seated, did the rain start coming down. 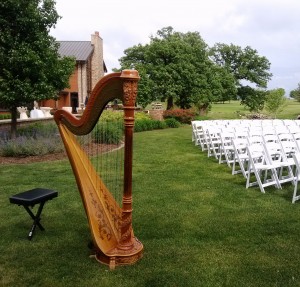 Chad and Angela did the best they could to get through the ceremony as quickly as possibly so that their guests could move inside.  Having help with keeping the harp dry and under a rather large umbrella allowed me to perform the ceremony as planned.  When you are having an outdoor wedding ceremony, a plan to keep the harp dry is essential!  This usually means an indoor back-up location, but a tent, awning, or large umbrella can work, too. 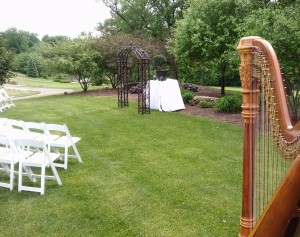 Once the guests were seated the wedding music began, with “Hallelujah” being played for the entrance of the parents.  As quickly as they could follow, the bridesmaids came in to the song “Isn’t She Lovely” by Stevie Wonder. 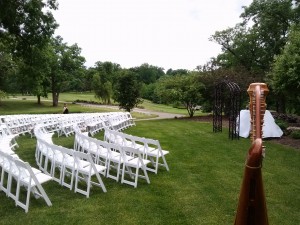 At this point the rain had started coming down, but the bride kept a smile on her face the whole way down the aisle as I played “You Are My Sunshine.”  With the rain picking up, the officiant moved quickly through the ceremony, but did not skip out on introducing us to the new couple!  For the rather quick recessional, I played “One Love” by Bob Marley. 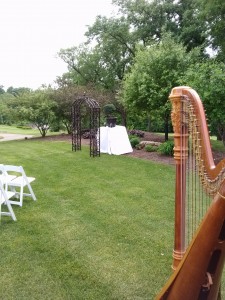