Collaborating with other musicians is always such a joy – and when I get to play duets with one of my former professors from Bradley University, it’s even better!  Kelsey and Marlon chose to have a harp and violin duet provide the music for their ceremony and cocktail hour. 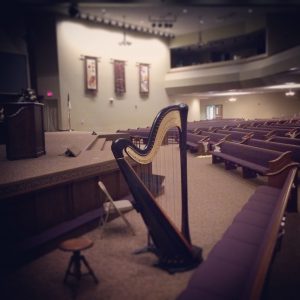 The ceremony was held at Crossroads United Methodist Church in Washington, Illinois.  As they had a large guest list, they opted to have an extended prelude, beginning half an hour prior to the ceremony’s starting time.  We played classical pieces as guests were ushered into the sanctuary, including “Air” from Handel’s Water Music and Bach’s “Arioso.”

The bride’s grandmother entered to “Jesu, Joy of Man’s Desiring” by Bach, and the parents of the couple followed to another Bach composition, “Prelude in C.”  The music for the wedding party’s processional was Pachelbel’s “Canon in D,” and Kelsey chose to make her entrance to the traditional “Bridal Chorus” by Wagner. 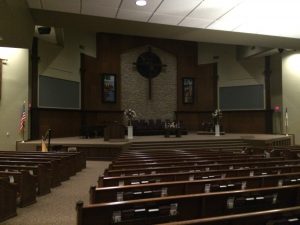 During the ceremony, we played “From this Moment On” for the lighting of the unity candle.  “Trumpet Voluntary” was the recessional, and played as the newly-married couple and their attendants filed out of the church.  The bride and groom came back to the sanctuary to individually dismiss their guests, and we continued the postlude music during this time.

A quick pack-up and off to the reception at the Embassy Suites in East Peoria.  We were set up right at the entrance to the lobby, and played through the cocktail hour.  They opted for a mix of classical and popular songs, and some of the ones we played included “When I Fall in Love,” “A Thousand Years,” and the “Flower Duet” from the opera Lakme.

The harp and violin sound so beautiful together, and it was wonderful to branch out from our classical roots into some more popular pieces and jazz standards! 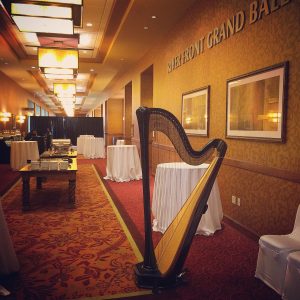 Either as a solo harpist or with other musicians, I love working with couples to make their music match their wedding style and musical tastes.  I am available throughout Central Illinois and beyond for wedding ceremonies and receptions, and you can request a quote on my website – Peoria Wedding Musicians. 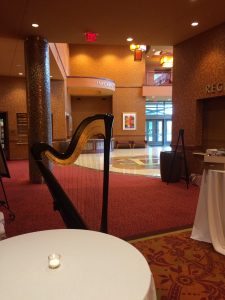