Weddings at home are always so personal, but certainly have their logistical challenges!  Fortunately, the groom’s family farm provided both a lovely ceremony site, a place for the reception tent, and plenty of parking for guests!  They made a wise choice hiring a wedding planner to make everything come together, and had the most beautiful early fall day.  It was finally comfortable to be outdoors – quite the change from many weddings I played this summer! 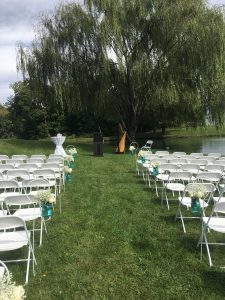 The ceremony took place overlooking the pond in front of the family home.  As Jaime and Ben’s families were seated, I played “Have I Told You Lately that I Love You” by Van Morrison.  The wedding party processional was Sting’s “Fields of Gold,” and Jaime went traditional for her entrance music – “Bridal Chorus” by Richard Wagner.

During the sand ceremony, the music was “One Love” by Bob Marley.  Yes, I can play that on the harp!  The couple released butterflies at the end of the ceremony, with “Collide” by Howie Day playing in the background.  Their recessional was also traditional – “Wedding March” by Mendelssohn. 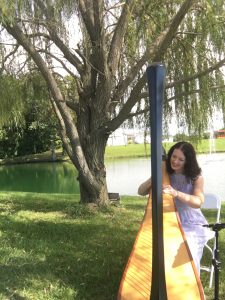 Following the ceremony, I moved the harp up to the reception tent, where I played for the cocktail hour.  The bride and groom requested that I play popular songs from the 1960s through today, and I had several guests come up afterwards and say that they recognized every piece I played.  It’s always a fun game of “name that tune” when people hear songs they know, but in an entirely unexpected way on the harp!  I also had a guest request “Stairway to Heaven.”  Most people ask as a joke, but are pleasantly surprised when I can actually play it! 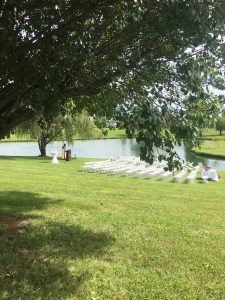 From classical and traditional to contemporary and unexpected, the couples with whom I work can customize their wedding music to fit their desires for the day.  To get in touch about choosing your wedding music, contact me via my website:  St. Louis Harpist for Weddings.  I play throughout the St. Louis metro area, anywhere in the Midwest, and even internationally for destination weddings! 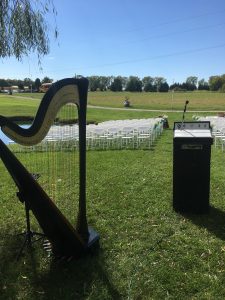