What a beautiful venue!  Mike and Ginger had 60-degree temperatures for their December ceremony.  Inside, however, the refurbished church was lit with soft blue lights, draped in white, and looked like a winter wonderland.  The Christmas trees on the stage completed the look! 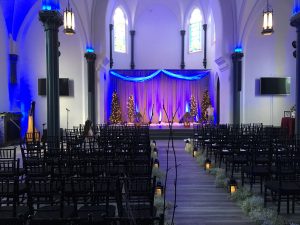 The Main Street Abbey in Columbia, Illinois, was the setting for both their ceremony and reception.  I provided the music for the ceremony, and was joined by a vocalist for the processionals and recessional.  Popular music was the prelude for guest arrival.  When everyone was lined up for the processional, she sang “And I Love Her” with harp accompaniment.

Ginger chose “Songbird” by Fleetwood Mac to be sung for her processional.  During the ceremony itself, they requested several times to have light harp music playing in the background.  These pieces included “Somewhere in Time,” “Ave Maria,” and the theme from Love Story.  The recessional was another Beatles song with vocals, “Here Comes the Sun.” 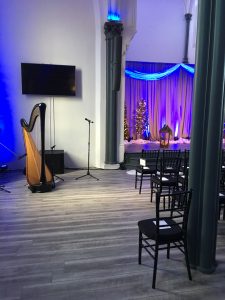 I continued playing as the wedding party and guests headed to the cocktail hour and reception at the back of the event space.  Just outside, the town’s Christmas parade was underway!

I can play solo harp, in ensembles with other musicians, or accompany a vocalist for your wedding.  Get in touch via my website, St. Louis Harpist, for details! 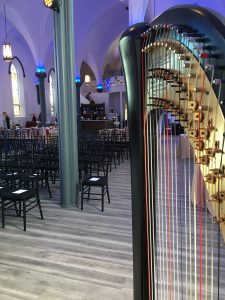