I love working for musical families!  The mother of the groom booked me for her son’s ceremony at the park in Harbor Point.  An enclave just steps away from downtown Harbor Springs, it is a charming, secluded, and peaceful location for a wedding. 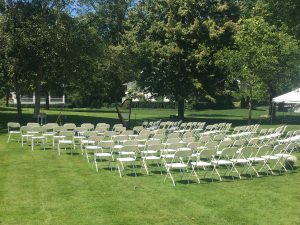 Guests were brought to the wedding via horse-drawn trolleys, as no cars are allowed.  Many arrived extra early to accommodate this, so I began prelude as soon as guests started to gather in the park.  The pre-service music included “Clair de Lune” by Debussy and Bach’s “Sheep May Safely Graze,” sung by the groom’s brother to harp accompaniment. 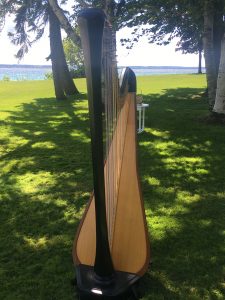 The wedding party came down the aisle to the 2nd movement “Romance” from Eine Kleine Nachtmusik by Mozart.  The bridal processional was Handel’s “Air” from Water Music.  During the service, I again accompanied the brother of the groom, this time as he sang “The Call” by Vaughan Williams. 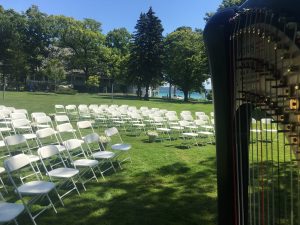 The recessional was “Hornpipe,” also from Handel’s Water Music, and the postlude included “Finale” from his Music for the Royal Fireworks and other uptempo classical harp pieces.  I continued playing until the guests had walked down to the family cottage for the reception. 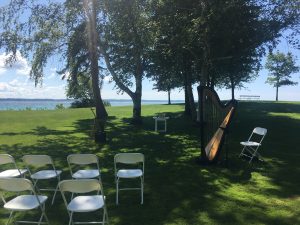 I play for weddings throughout Northern Michigan, on Mackinac Island, and across the Upper Peninsula.  Contact me to check availability and receive a quote:  Northern Michigan Harpist for Weddings.