Harpist in Holland, Michigan ~ Wedding on the Beach

Debi & Jerry had the perfect day for their wedding on the beach!  Friends and family joined them from Wisconsin & Kentucky to celebrate at Holland State Park in Holland, Michigan.  Their morning ceremony was followed by a luncheon in the shelter house.

With many young grandchildren in attendance, Debi wanted to be sure they would hear music they recognized.  As everyone gathered for the ceremony, I played a variety of popular pieces, including “Rainbow Connection” from The Muppet Movie.  It’s one of my favorites, and always a hit!  “Edelweiss” from The Sound of Music was the signal that the wedding was about to begin.

As the attendants entered, I played “When You Wish Upon a Star” from Pinocchio.  The bride’s processional music was “What a Wonderful World,” and “You Raise Me Up” by Josh Groban served as a musical interlude. 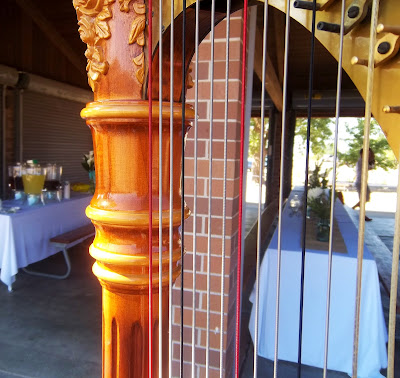 The bride and groom had a specific song that they wanted included for their unity sand ceremony – “You’ve Made Me So Very Happy.”  Since it wasn’t a song I already had in my repertoire, I arranged it for harp specifically for them.  We were all thrilled with the results!  At the conclusion of the ceremony, everyone exited to “Thank You” by Dido.

A slight re-adjustment of the harp to face the tables, and I continued to play through lunch.  The bride and groom requested that I play mostly popular songs and folk music, some of which included:

Up next, the newlyweds are heading off with a couple of their friends to India!  I may be just a little bit jealous…

If you are planning a beach wedding, the harp can be the perfect musical complement to your day!  In addition to the large concert harps I offer, I also have more portable Celtic-style harps that can be placed directly on the sand (here, we had a solid concrete surface to set up the Venus Classic harp).  Visit my website ~ Holland Michigan Harpist ~ for details! 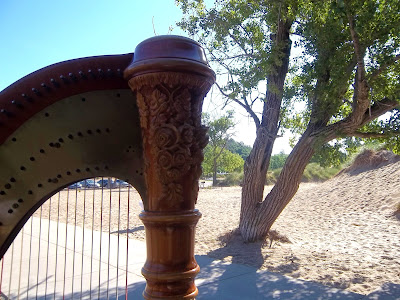 One Response to Harpist in Holland, Michigan ~ Wedding on the Beach