Shannon and Ollie were amazing to work with for their wedding!  They even came to the Hamilton’s Bridal Expo in Jacksonville last January to meet me and hear the harp in person.  With the ceremony outdoors at Springfield’s Lincoln Memorial Gardens, they were concerned about keeping the harp safe and shaded, and set up a white tent for me.  It looked like it was going to be a beautiful day…

Prelude music began half an hour before the ceremony was to start, and included a variety of contemporary music, from “Clocks” by Coldplay to “Fields of Gold” by Sting, along with the bride’s special request, “Lucky” by Jason Mraz.  Many guests arrived early to enjoy some time in the gardens, and were treated to harp music as they waited for the wedding.

The families of the bride and groom entered to “Falling Slowly” from Once, and as the wedding party came down the aisle, I played “Hallelujah” by Leonard Cohen.  This song was made popular by being in the movie Shrek, and it’s become one of my personal favorites, too.  Shannon entered to “Marry Me” by Train ~ the one song she knew she wanted from the very beginning of her planning! 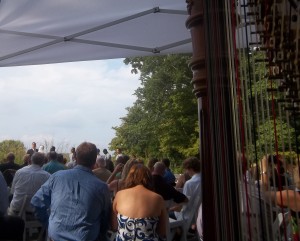 The bride and groom placed love letters in a box, during which I played “Rainbow Connection” from The Muppets.  The couple also served communion to their guests, with “Hymne” and “Arioso” playing in the background.  The recessional was “I’m Yours” by Jason Mraz.

I continued to play as guests left the ceremony site and through the beginning of the photo session.  That was suddenly cut short by a pop-up thunderstorm ~ and the whole wedding party was as grateful for the tent as I was!  Everyone huddled in there with me and the harp, and I played “Marry Me” for Shannon again.  In the excitement of the moment, she said she barely remembered her processional! 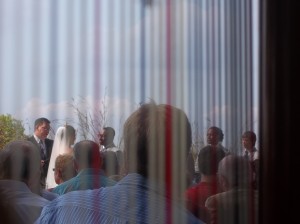 Fortunately, the rain passed quickly, and they were able to resume pictures and I could get the harp back to the car without either of us getting drenched.  A tent is always a good idea, even when the weather forecast is clear!

As a professional wedding harpist, I play for ceremonies, receptions, and rehearsal dinners throughout Central Illinois and beyond.  Visit my website {Illinois Wedding Harpist} for more information! 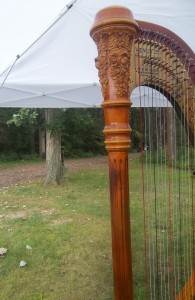