Kate and Jared were married at the groom’s family home in South Bend, Indiana.  Although rain was forecast, the weather turned out beautifully and the ceremony was able to go ahead as planned, with the St. Joseph River in the backdrop.  The guests (and harpist!) stayed cool in the shade of the tent. 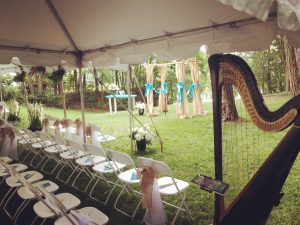 As guests arrived, I played a variety of classical pieces and popular love songs.  They chose “Canon in D” for the wedding party processional, and Kate entered to “Have I Told You Lately that I Love You.”  The couple included a tree-planting ceremony during the service, in which they combined soils from their childhood homes. 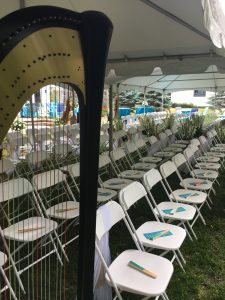 During the signing of the marriage license, I accompanied the cousin of the bride singing “I’ll Be” by Edwin McCain.  The recessional was “Here Comes the Sun,” from the Beatles’ Abbey Road album.

Following the ceremony, I continued with upbeat popular and classical music as guests exited the tent and enjoyed champagne and hors d’oeuvres.  The reception followed later at Gamba Ristorante in Merrillville, Indiana. 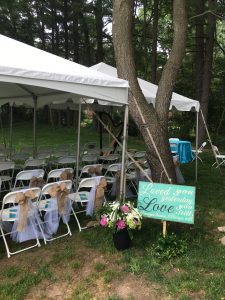 I play for weddings throughout Northern Indiana, Southwest Michigan, and beyond, so please contact me about providing music for your event!  Check my website ~ Harpist in South Bend ~ for details! 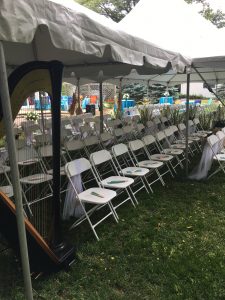