Bailey and Brad were married at the groom’s family home just east of Bonne Terre, Missouri.  The ceremony took place on the large back lawn, with the cocktail hour around the pool and the dinner in the tent and barn.  Very much a family affair! 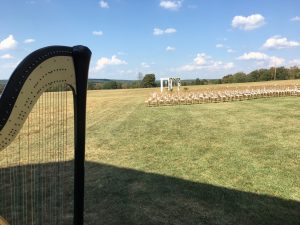 For September – or any time of year, really! – it was a crazy hot day.  Even though it was a little distance away from where the ceremony would take place, I had to set up the harp in the shade.  High temperatures can cause the wood glue that holds the instrument together to soften and fail, and the direct sunlight speeds up the effect. “Exploding harp” was not the sound they were going for!  I plugged in to my amplifier, had a family member check the harp’s volume from the ceremony site, and was ready to go! 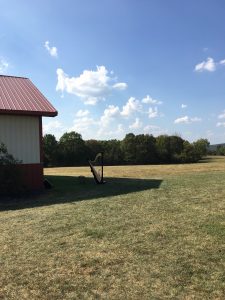 As the families of the bride and groom entered, I played “Have I Told You Lately that I Love You.”  The wedding party came down the aisle to “Bless the Broken Road,” and Bailey’s processional was “Marry Me” by Train.

At the beginning of the service, the couple presented roses to their mothers, with light harp background music.  For the unity sand ritual, I played “A Thousand Years” from Twilight.  Bailey had a hard time deciding what she wanted for her recessional, so asked me to come up with something.  I selected “Great Day,” which is a harp-specific piece that is very flashy and exciting, the perfect end to a wedding ceremony! 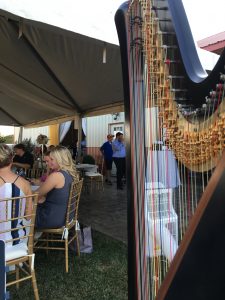 Next was the cocktail hour, so I moved the harp closer to the pool house where I set up to play popular love songs for the post-ceremony mingle.  Most guests opted to head inside the tent for some welcome shade!  It wasn’t long before the sides of the tent were removed and sunset brought cooler temperatures.  I moved the harp just outside the tent for the dinner hour, and kept playing until the best man and maid of honor gave their toasts.

I play for weddings in Ste. Genevieve, Farmington, and throughout Southeast Missouri – and anywhere else! – and would love to collaborate with you on the music for your ceremony and reception.  On my website {Southeast Missouri Harpist} you’ll find song lists, pictures, and more.  Contact me for availability and a quote! 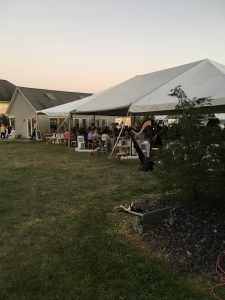