Dan and Judy had a lovely location for their wedding – the Lighthouse Lodge in Monticello, Indiana, right on the shores of Lake Shafer.  The wind that day was a challenge, but we all made it through!

The wind was actually so strong I was never able to take my hands off the harp – it’s 90 pounds of top-heavy furniture, and threatened to topple over many times.  There were moments when I was playing with one hand and holding on for dear life with the other!  In all my years of playing, this was definitely the windiest wedding I’ve ever had.

The officiant and I could not use microphones, as they just picked up the sound of the wind, so we both just belted as loudly as we could and hoped for the best!  The bridesmaid held down her skirt and the bride herself helped hold back the hair of one of the readers so she could see the words on the page.  It was a full team effort! 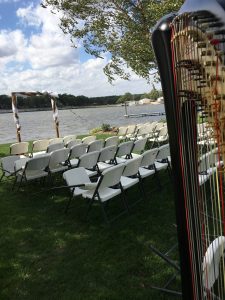 As guests took their seats (and set them back up after the wind knocked them over!), I played “Hey Soul Sister” by Train, “Falling Slowly” from Once, “Not While I’m Around” from Sweeney Todd, and “Something There” from Beauty and the Beast.

The parents entered to “Edelweiss” from The Sound of Music, and the processional for the wedding party and bride was “Rainbow Connection” from The Muppet Movie.  The bride and groom performed a tree planting ceremony, and the background music they chose for this was “Concerning Hobbits” from Lord of the Rings.  The recessional, “Here Comes the Sun,” sent the guests off to the tent for the reception.

I played for cocktail hour as well, fortunately in the protection of the tent!  Music for the reception included:

Not at all things you expect to hear on the harp!  I love when couples choose music that has special meaning to them – or at least music they really like! – rather than feeling constrained by the traditional playlists. 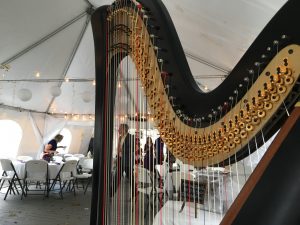 I play the harp for weddings throughout Northern and Central Indiana, or anywhere else!  On my website {Northern Indiana Harpist for Weddings} you’ll find song lists, more pictures, and videos.  Please contact me about providing music for your event!