“Never say no to an adventure!”

That’s my life motto, and it certainly extends to my work as a harpist!  I love that the harp has taken me all over the world, having performed at countless events across four continents, six countries, and hundreds of beautiful venues.  Last week, I escaped the frozen Midwest and traveled – harp in tow – to Panama!

The wedding was held at Pacific Bay Resort in Boca Chica.  The harp is always a hit making its way through the airports – and this itinerary involved four of them!  I left from St. Louis, and flew through Atlanta and Panama City before arriving at the David airport in Chiriqui, Panama. 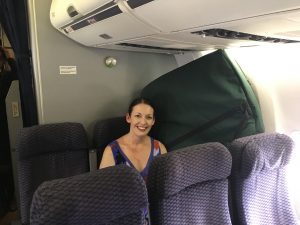 When flying with the harp, it can either travel as oversize/weight baggage in the hold, or it can fly in its own seat in the cabin.  Because of the luggage embargo over the holidays that restricts the size of checked baggage to some destinations, having it travel with me in the cabin was the best way for this event.  She’s a great seat mate! 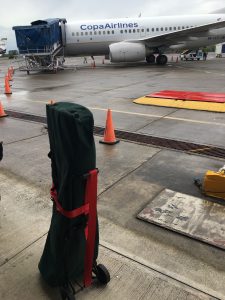 The drive from David to the dock in Boca Chica allowed us to get a glimpse of the beauty of the Chiriqui highlands.  The final travel leg was a water taxi, as the resort is not accessible by road.  We were greeted on the beach by Ola and Kai, the bride and groom, and I entrusted the harp to the wonderful staff at Pacific Bay.  I was actually sort of relieved not to be in charge of it for a few moments! 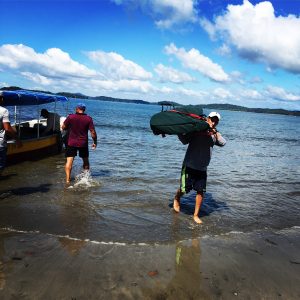 I arrived the afternoon before the wedding day, so had plenty of time to accommodate any travel delays that could have arisen.  Fortunately, there were none, so I spent that day getting the harp tuned and used to the more humid climate and rehearsing with the bride, who was singing for the reception the following day. 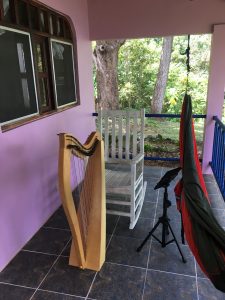 The resort itself is peaceful and stunningly beautiful.  With walks to and from the restaurant for every meal, I got to see the flora and fauna of this region of Panama, including monkeys, deer, iguanas, deer, and black squirrels.  The howler monkeys were a very effective alarm clock! 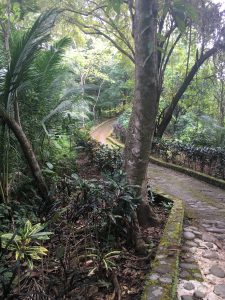 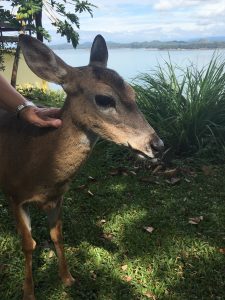 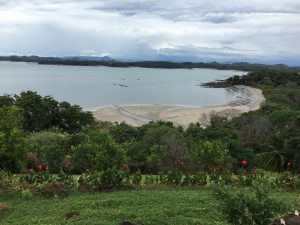 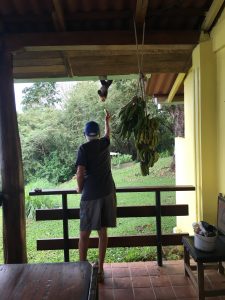 The beauty of a destination wedding (besides the gorgeous setting!) is the flexibility you can have with your plans.  Although the ceremony was originally scheduled for 3:00, they opted to move it two hours later to avoid the hottest part of the day.  When all of your guests are already there, changes like that are easy to make! 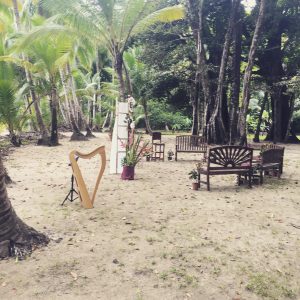 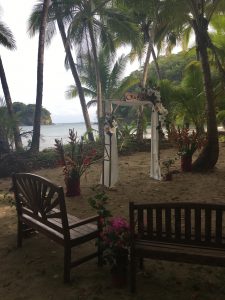 South Beach was the chosen site for the ceremony, and the centerpiece was a bamboo arch the father of the bride and designed, built, and brought with him from Boston.  We were set up in the shade of the jungle canopy, but still had the ocean view and the sound of the waves all around.  So, so beautiful!  The wind coming off the Pacific Ocean even played the strings of the harp – it’s an otherworldly sound, and fit in well with the setting. 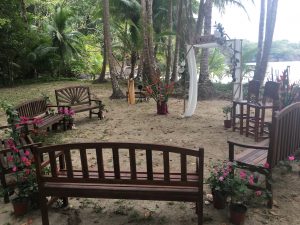 As guests arrived, I played “Marry Me” by Train and “Falling Slowly” from Once.  The processional, lead by the flower girl, was “Hymne” by Vangelis.  During the ceremony, all of the guests participated in a “hand on heart” ritual, with “Reverie” by Grandjany playing in the background. 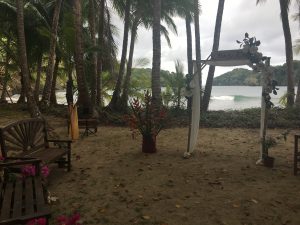 No sooner than that completed did the first raindrops start to fall.  I knew we were in trouble when I saw the parade of hermit crabs heading for shelter!  I first moved the harp further away from the beach to get the harp under a thicker tree canopy, but we soon all moved inside the gazebo just steps away.  They even brought the arch along!

The ceremony continued in the more intimate space, including a ring warming to “Eyes on Me” from Final Fantasy VIII.  The recessional was “Wedding March” by Mendelssohn.  Ola said she felt as if she wouldn’t really be married if that particular piece wasn’t played.  It’s traditional in her native Poland! 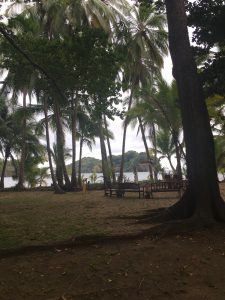 I hurriedly got the harp packed up, and took a golf cart back up to the restaurant.  Keeping the wooden harp dry is a must!  I was set up and ready to play for the dinner soon thereafter.  Music for the reception included “We’ve Only Just Begun,” “I’m a Believer,” “I Choose You,” a variety of classical pieces, and “Hallelujah” – which inspired an impromptu sing along!

The families are very musical, and most get-togethers include music-making of some kind.  The bride sang to harp accompaniment as the guests waited for dinner to be served.  Her first selection was the Spanish folk song “La Paloma,” followed by “A Time for Us” (sung in Italian).  Lastly, she sang “You Have Made Me Love” from the Broadway musical Cyrano. 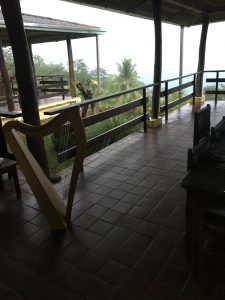 No matter where your wedding plans take you, the harp can come along, too!  I perform for weddings around the globe, and would love to work with you and bring beautiful harp music to your celebration.  You’ll find details on my website ~ Harpist for Destination Weddings ~ and you can contact me there for a quote.  Happy planning and adventuring!