Tiffani and Adam planned a microwedding with just close family in attendance, and added a touch of glamour with a harp!  They will have a larger celebration later, but still wanted to get married this year, and did so at the Inn at Stonecliffe on Mackinac Island.  I played there less than a month ago – even the horse taxi driver recognized me and my harp! 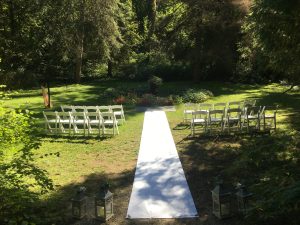 Their ceremony was in the woodland grotto.  Parents and grandparents were seated to Pachelbel’s “Canon in D,” and the bridesmaid came down the aisle to “Somewhere Over the Rainbow” from The Wizard of Oz.  Tiffani’s processional was “A Thousand Years” from Twilight: Breaking Dawn.

The aunt of the groom performed the ceremony, and it included a unity ritual with “Can’t Help Falling in Love” playing in the background.  Their recessional was “All My Loving” by The Beatles. 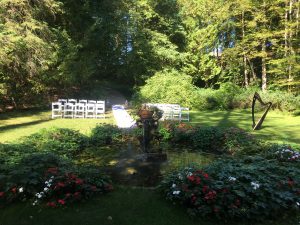 Everyone went back up the hill to the reception on the portico behind the Inn.  The cocktail hour included popular songs from the 1960s through the present day, and the cake cutting was to the French jazz standard “La Vie en Rose.”  Their first dance as a married couple was to “At Last,” the Etta James classic.  Yes, you can dance to harp music! 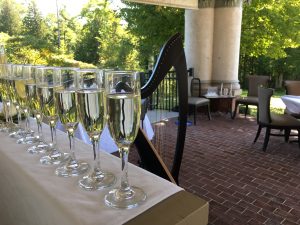 I play for weddings on Mackinac Island, as well as throughout the Upper Peninsula and Northern Lower Michigan.  Get in touch to plan your dream wedding soundtrack at Mackinac Wedding Music! 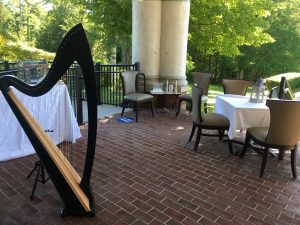 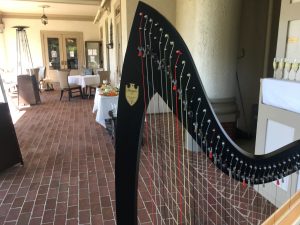