Mikenzy and Korey were married on a Saturday in May at the Coralville Marriott.  I played from the upper terrace, with a perfect view over the ceremony – and the doors not too far behind me if the rain began to fall!  Fortunately, it held off and everything went ahead outdoors as planned. 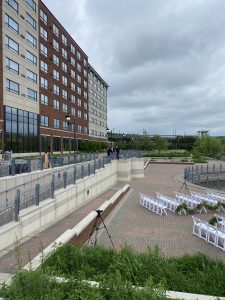 As the parents and grandparents walked down the ramp and were seated, I played “Just the Way You Are” by Billy Joel.  The wedding party processional (which included their three dogs, all in wedding finery!) was “Landslide,” and the bride chose Leonard Cohen’s “Hallelujah” for her entrance music. 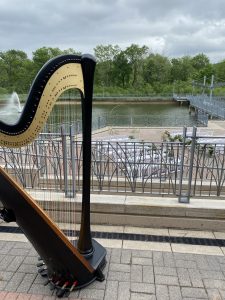 The sister of the bride officiated the ceremony.  The recessional to send everyone off to the reception was “Tenerife Sea” by Ed Sheeran.  I played postlude music as guests filed out, and lots of glissandos, at the request of the flower girls! 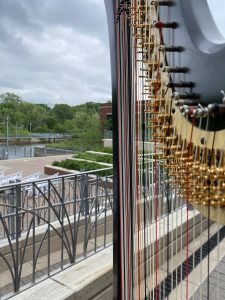 I play for weddings in Iowa City and throughout Eastern Iowa.  If you are looking for a harpist for your event, please get in touch!  Visit Iowa City Wedding Harpist to view song lists, more pictures, and contact me for a quote. 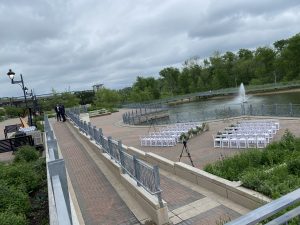