Sarah and Zac were married at Indian Lake State Park just outside of Manistique, Michigan.  They held their ceremony in the picnic shelter, and their reception was a short walk away at the beach pavilion.  They were able to enjoy the all the natural beauty of the U.P., but without worrying about the weather! 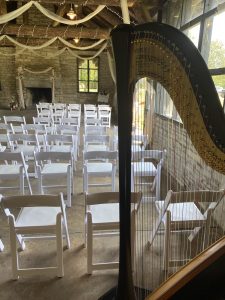 They chose traditional music for their wedding ceremony, with the wedding party – including the ring bearer in a remote-controlled Audi – coming down the aisle to J.S. Bach’s “Jesu, Joy of Man’s Desiring.”  Sarah chose “Canon in D” by Pachelbel for her processional. 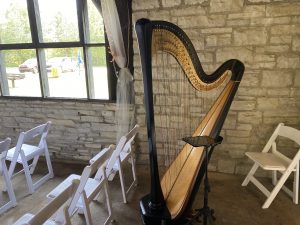 “Wedding March” concluded the ceremony, and the guests made their way to the reception.  As the bride and groom didn’t have dancing at the reception, they opted for a private first dance after the postlude.  Once it was just the newlyweds left at the ceremony site, I played “Bless the Broken Road” so they could have a first dance, with only the photographers there to capture the moment. 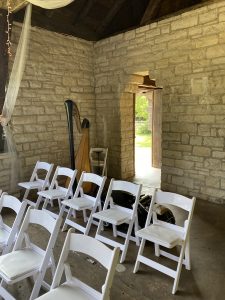 I play for weddings and other events in Manistique, as well as throughout the Upper Peninsula and Northern Wisconsin.  Contact me from my website ~ Upper Peninsula Wedding Harpist ~ to check availability and receive a quote! 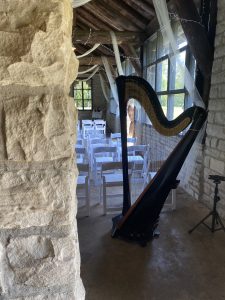