It’s a special honor when other musicians book me to play for their weddings – and they always have the most unique song choices!

Amanda and Charlie has originally planned to get married in early April, but the COVID-19 pandemic made that impossible.  They were fortunate to be able to reschedule to June with a minimum of disruption.  Their ceremony and reception took place at the Indianapolis Propylaeum. 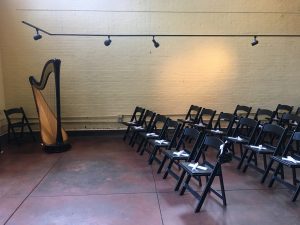 With playing for both the ceremony and the spotlight dances in the carriage house, plus dinner and cocktails in the main house, it required a two-harp set up.  I can move a harp between locations at a venue, but this required a back and forth (twice), so thought it would be easier to set up two harps rather than try to push one through the crowd of guests multiple times.  Fortunately, I have multiple harps!

As guests arrived at the ceremony, they were able to choose a wrist band to inform other guests of their level of comfort.  It’s a thoughtful gesture to provide this, in the midst of a pandemic, for guests who may not know other attendees. 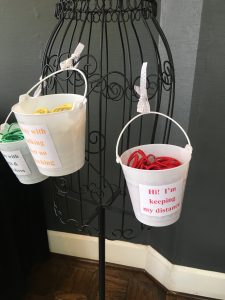 The prelude music included “All My Loving” by the Beatles, “Have I Told You Lately that I Love You” by Van Morrison, and “We’ve Only Just Begun” by The Carpenters.  The family was seated to “Can You Feel the Love Tonight” from The Lion King, followed by “Marry You” for the groom’s entrance.  The bridesmaids came down the aisle to “Hallelujah” by Leonard Cohen, and the bride’s entrance music was Ed Sheeran’s “Perfect.” 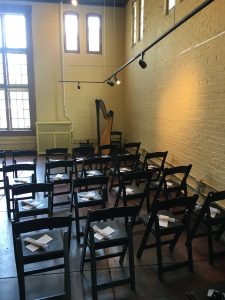 During the ceremony, they requested “River Flows in You” and “True Colors” to be played during the knot tying and the exchange of rings.  They wanted something upbeat and unexpected for their recessional, and went with “Despacito.”  A versatile harpist can play anything for you – classical to rock to Celtic to jazz! 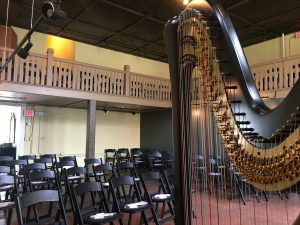 As guests continued through the receiving line, I went inside the house (to my already set-up harp) to play for the cocktail hour.  This included a variety of classical and love songs, with an elegance matching the interior of the building. 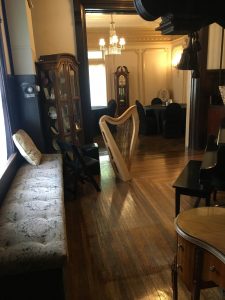 Dances were back in the carriage house.  Amanda and Charlie danced their first dance to “A Thousand Years” from Twilight: Breaking Dawn.  The father-daughter dance was “Because You Loved Me,” and the groom and his mother danced to “Yesterday.”  The bouquet and garter toss were accompanied by “Fields of Gold” by Sting, and the longest-married couples dance was to “Endless Love.”  After the dances, back to the house for dinner.  With the harp already there, another quick transition! 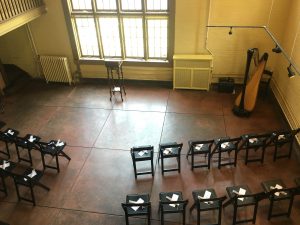 I play for weddings – ceremonies, dinners, and dances – in Indianapolis and throughout Central Indiana.  Contact me to discuss the details of your event, and how harp music can add an extra element of romance and glamour to your wedding!  More information at:  Indianapolis Wedding Harpist.