November is not a very busy month for weddings – only three for me this year!  On the 6th, I played for a beautiful ceremony at the First Christian Reformed Church in Demotte, Indiana.  Her flowers were stunning, incorporating peacock feathers in a rich variety of fall colors: 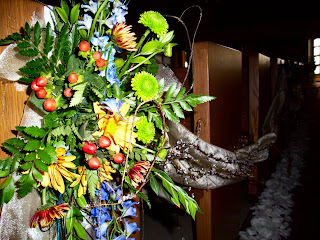 They used rose petals to line the aisle, and also to create a monogram in the center: 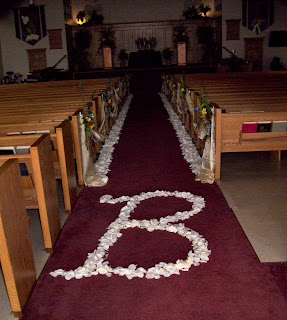 If you do this, just be sure to seat your guests from the side aisles!

Many churches require that you use their in-house musicians for your wedding ceremony.  That does not, however, mean that you cannot include the harp in addition to the pianist or organist.  I love collaborating with other musicians, and for this wedding, the organist provided music as well.

She played for the postlude, recessional, and congregational hymn singing, while I provided harp music for the earlier parts of the service.  The prelude music included “Hymne” by Vangelis, “Largo” by Handel, “Ave Maria” by Schubert, and “Canon in D” by Pachelbel.  Other selections were: 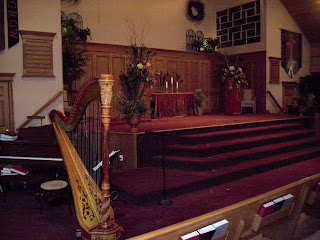 The next day, Saturday the 7th, I got to stay a little closer to home, and played for a wedding right in South Bend at the Zion United Church of Christ.  The bride and groom spent a lot of time coming up with just the right musical ambiance for their ceremony.  They chose softer music for the processionals, and then really cranked up the excitement level for the conclusion of the service!

The prelude music included light classics, which segued into “Hymne” by Vangelis for the bridal party processional.  For the entrance of the flower girl, I composed a lighter and faster variation of this piece.  Glissandos announced the arrival of the bride, and she came down the aisle to a Czech folk song, “I See You, My Beloved.”  These two pieces work extremely well as a pair, because they are in the same key and have a similar style.

Their officiant was extremely flexible, and allowed them to have some light music played while they said their vows.  They also requested that I fill in with “moving music” any time people had to walk to the front and return to their seats.  That worked extremely well, and made the transition time between ceremony elements flow seamlessly.

When they were selecting the music, we got a bit stuck trying to come up with a recessional.  They didn’t want something traditional – just something fast!  Once I played the first few lines of “Sonata in Re” by Albeniz, that was it!  The postlude music stayed uptempo and set the mood for the party! 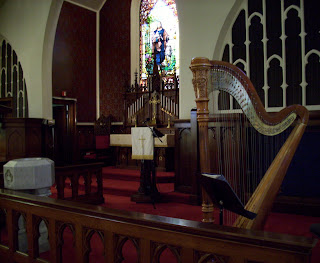 On the 28th, I returned to St. Adalbert’s for another wedding Mass.  This time, it wasn’t all in Spanish!  I also had the opportunity to work with a wonderful vocalist, who had been a teacher of the bride.  The father of the bride sang “The Wedding Song” as the families were seated.

We had a couple of snags with the music for the Mass – we had been given different pieces than were listed in the program! – but everything worked out with some help from the priest and mother of the groom.  The church had copies of what we needed, and we were both there in plenty of time to get everything put together and still get a rehearsal in before the guests started to arrive.

In addition to the music for the Mass we played and sang:

If you are having a full Catholic Mass, there is a lot of music to select!   In addition to the prelude, processionals, recessional, and postlude, you will also need music for the psalms, offertory, sign of the peace, communion, and presentation of flowers.  Be sure that you confirm all ceremony music selections with your priest, as they must be appropriate for the worship service.