What better way to ring in the new year than at a wedding!  I’ve played for several New Year’s Eve weddings.  It doesn’t matter the day of the week, everyone is ready for a party!

This year, I was at Chapel Hill Golf Course and Event Center outside of Princeton, Illinois, playing for Aimee and David’s wedding ceremony.  The ceremony was held at the chapel on site, with the reception just up the drive at the clubhouse.  Amber uplighting gave the whole space a warm glow on a very cold night! 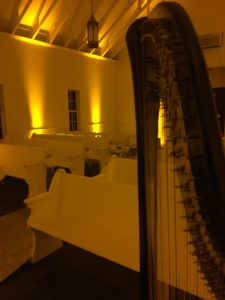 The families and wedding party entered to “Canon in D” by Pachelbel, and Aimee came down the aisle to the traditional processional, “Bridal Chorus.”  A harp solo, “At Last,” preceded the creation of a memory box, with “Perfect” by Ed Sheeran playing in the background.

A handfasting ceremony was their unity ritual, during which I played “Hallelujah” by Leonard Cohen.  The recessional was the traditional “Wedding March” by Mendelssohn, followed by “Trumpet Voluntary” and “Marry Me” as the guests exited the chapel. 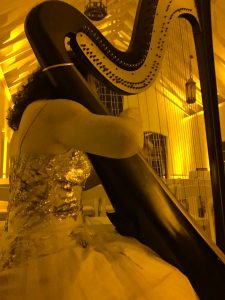 Contact me about adding the elegance of the harp to your wedding – on New Year’s Eve or any day of the year – at my website {Northern Illinois Wedding Music}.

Spot the harp reflected in the window!