Melanie and Alex were married in June at St. Ann’s Catholic Church in Geddes, South Dakota, a small town southwest of Mitchell and northwest of Yankton.  Melanie wanted to have contemporary music for her ceremony, but most Catholic parishes have restrictions on the music you can use during the Mass.  After a few times speaking with her priest, all of her selections were approved!  Some churches have more flexibility if the songs will be instrumental rather than sung, so it never hurts to check as you are making plans for your ceremony music. 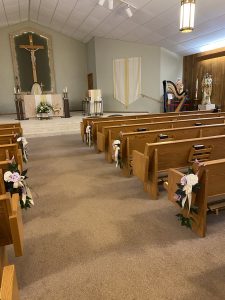 The prelude music for guest arrival included “You are the Reason,” and the wedding party came down the aisle to “Marry Me” by Train.  The bride’s processional was “A Thousand Years” from Twilight: Breaking Dawn. 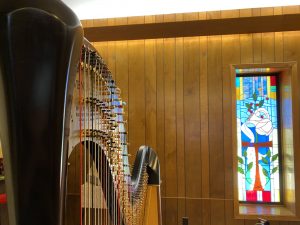 During the lighting of the unity candle, they chose “I Get to Love You” by Ruelle.  The church organist played for the sung parts of the Mass and the beginning of communion.  I played the Schubert “Ave Maria” for its conclusion, and an instrumental solo of “When I Say I Do” by Matthew West.

Their recessional was Dan + Shay’s “Glad You Exist,” followed by “Marry You” by Bruno Mars and other joyful songs as the guests exited the sanctuary. 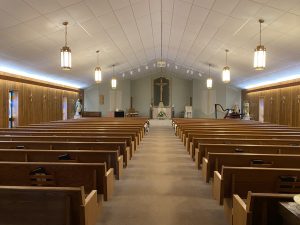 If you are looking for a harpist for your wedding, get in touch!  I play for weddings throughout South Dakota and Nebraska, in churches, gardens, private residences, banquet halls, and more.  Visit my website ~ South Dakota Harpist ~ to contact me for a quote!